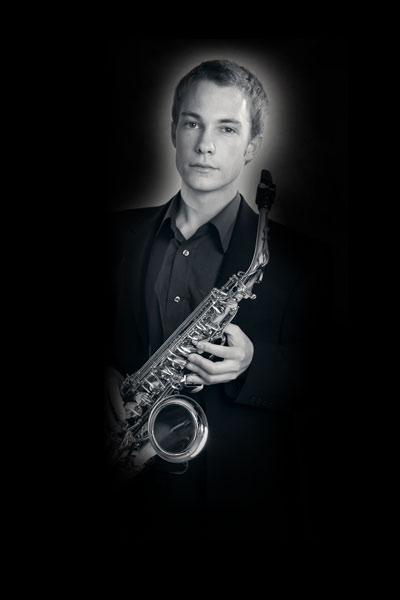 Edward Leaker is a professional saxophonist based in the UK.

Edward grew up in the West Country, studying the saxophone under prominent tutors and performing in a variety of musical settings. From an early age, he showed a great interest in studying jazz and classical styles on the instrument. Edward was awarded the status of Licentiate of the Guildhall School of Music and Drama for classical performance and later he successfully gained a first class honours degree studying with Duncan Lamont.

In 2004, Edward graduated from the Royal Academy of Music, London with a Masters Degree in Music Performance. He studied saxophone and clarinet at the Royal Academy under the instruction of Richard Addison and Martin Speake.

Edward now enjoys a busy and varied freelance career performing in prestigious venues around Britain and Europe such as The Hotel de Paris in Monte Carlo, The Royal Albert Hall in London, The 100 Club in London and twice for The Queen! He has also performed with the National Youth Jazz Orchestra and the Bristol Ensemble and has appeared on BBC television’s ‘Born and Bred’.

Edward’s teaching commitments include tutoring saxophone and clarinet students at Wells Cathedral Specialist Music School where he holds the post of Head of Woodwind & Jazz as well as running a private teaching practice and jazz improvisation & performance workshops. Edward is also a mentor and tutor for South West Music School.

Edward’s own projects include; Swing Machine Jazz Orchestra (A professional big band featuring some of the UK's top players), Blaze (a ground breaking crossover group comprising saxophone and strings) and The Edward Leaker Band as well as groups for events and functions.

Edward is a Yanagisawa UK Artist